The ABB Invitational was Inaugurated in March of 2000

The tournament was originally established as a 36-hole stroke play competition for High School Golf teams from the Pee Dee Area of South Carolina.  Held every Spring since 2000, the tournament has been open to both public and private school golf teams.
The tournament through steady promotion, developed into more than a regional event.  Teams from all over the state of South Carolina now compete in the tournament.  In 2004, the tournament was elevated in status with acceptance to the South Carolina Junior Golf Association's official tournament list for individual state rankings.  2008 saw tournament officials expanding the field to include teams from North Carolina and Georgia.
The Tournament is conducted on two of the top golf courses in the Pee Dee Area of South Carolina.  The hosting courses are The Country Club of SC and Florence Country Club.
Florence Country Club is steeped in history with a founding in 1924.  While the original architect is unknown, the 18-hole layout was built in the "Donald Ross" style and is located on a beautiful 77-acre site with considerable elevation changes throughout the property.  Florence Country Club has been host to two USGA National Championships and many top professional and amateur tournaments.  One of the more well-known tournaments hosted by the club is The Grant Bennett Florence Junior Invitation.
The Country Club of South Carolina was built in the late 1960's under the direction of the late Grant Bennett with the golf course designed by Ellis Maples.  The CCSC is a wonderful championship venue that has hosted many top amateur and professional tournaments including a tour stop for the now Web.Com Tour.  The CCSC is also the home golf course for the Francis Marion University Golf Team (2003 Division II National Champions).
During the past twenty years, the tournament has featured a number of top Juniors from the State of South Carolina.  Past individual champions include players who went on to be top collegiate top players:  Tripp McAlister (Coastal Carolina), Colby Hyduke (Newberry), Kellen Altman (College of Charleston), Christopher Couch (Francis Marion University), Baker Elmore (USC), Steve Behr (Clemson), and Nicholas Beiers (Coker College).
The tournament is fortunate to be able to conduct their event at these superb facilities with professional staff eager to accommodate all contestants.  The atmosphere and professionalism of all who are associated with the tournament has played an integral part in establishing the tournament as one of the most popular High School Tournaments in South Carolina.
The 2019 edition saw Trinity-Byrnes Academy defend their 2018 win with a two-day total of 602.  Trinity-Byrnes' victory helped propel them to a great season concluding with a SCISA 3A Championship victory.  Runner-up, A.C. Flora High School went on to a 2nd place finish in the 4A State Championship.  Individual medalist honors went to Gene Zeigler of Trinity-Byrnes with a 2 under par total of 141, which edged out Carolina Forest's Chris Fortenberry by one shot.
With 2020's tournament cancelled due to COVID, the 2021 edition of the tournament has been greeted with great interest from the High School Golfing community.  The field for this year's tournament is shaping up to be one of the tournament's strongest.  Trinity-Byrnes Collegiate will be defending their 2019 win and will be challenged by perennial stalwarts A.C. Flora, Lexington High School, Hartville and Wando. 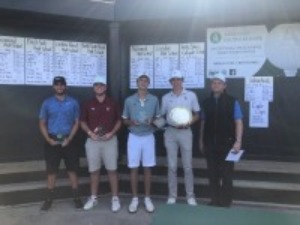